Detroit, one of America’s greatest and historically rich cities, is experiencing an economic rebirth.  Its pre-war and midcentury architectural legacy is welcoming a new era of design innovation as developers and entrepreneurs reshape the city and create new communities of innovation and growth.  The Motor City is quickly maturing into a technology hub as the automotive and tech industries coalesce to create new innovations in mobility and transportation breakthroughs – including autonomous vehicles. Major tech companies such as Google and Microsoft are joining GM, Ford, and others downtown. A mix of new tech and creative start-ups are growing, and coworking spaces such as Bamboo Detroit, SpaceLab, and WeWork are housing a new generation of workers. New hotels, restaurants, and retail are filling service gaps and adding long-needed amenities that will continue to strengthen the livability and walkability of the city’s core.

UNESCO recently named Detroit a “City of Design” – joining Montreal as one of only two North American cities to earn this designation. The city and region’s legacy of architectural, industrial, and product design helped earn this designation. Architects and designers such as Norman Bel Geddes, Charles & Ray Eames, Albert Kahn, Florence Knoll, Ludwig Mies van der Rohe, Eero Saarinen, and Minoru Yamasaki contributed to this legacy and left the city and the region with a built environment that others are gradually re-adapting for 21st century uses.  Opportunities exist to sustainably adapt existing spaces throughout the region’s urban and suburban settings. Downtown Detroit office vacancy is just 7.5%, and an estimated $5.4 billion in real estate development projects are underway in the downtown area. The regional office vacancy rate is falling and is estimated at 15.5%, which is creating incentives for landlords to reimagine new ways to attract high profile tenants. Detroit’s legacy industrial spaces also invite ambitious new ideas and capital investment. 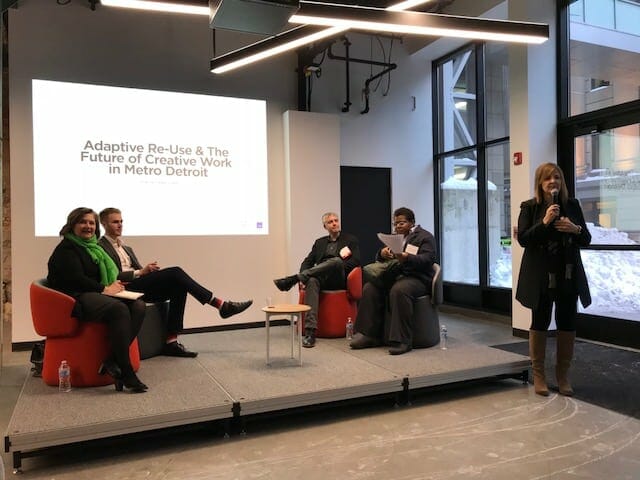 HLW and CoreNet organized and recently hosted a panel discussion on adaptive re-use trends to further spark new ideas for how Detroit’s real estate legacy could be used to continue attracting creative talent to the city and region. HLW drew from its experience undertaking several major adaptive re-use projects around the country as well as its experience working with developers to re-position legacy office space for use by tenants in growing tech and creative sectors. The Lear Corporation – a tier-one automotive supplier – hosted the event in their downtown Innovation Center. Pete Bacevice (HLW’s Director of Research) and Mat Triebner (HLW’s Director of Strategy & Discovery) kicked off the discussion and presented a number of planning trends and case studies. The panel also featured Kimberly Driggins (Director of Strategic Planning/Arts & Culture for the City of Detroit) and Constance Bodurow (Founder & Director, studio(Ci) LLC; and Associate Professor of Architecture, Lawrence Technological University) who shared examples of work being done throughout Detroit’s neighborhoods at local scale. The discussion benefited from a mix of global, national, and local perspectives.

Highlights from the discussion include:

HLW is excited to contribute to the discussions that will shape the future of Detroit and other great American cities as they grow and support the next generation of work and innovation.

We're all for incorporating biophilic elements in #office spaces as they provide many benefits to employees. #Workplacedesign experts also see an opportunity to bring the indoors outside! Thanks for the insight, @TedMoudis, @PininfarinaSpA and @HLWIntl. https://t.co/U2hLYJJbau

We're thrilled to share that Kering’s new #workplace has received the Merit Award for Built Interior Architecture from the 2020 @AIANJ #Design Competition.

Congratulations to our client, @KeringGroup, and the whole project team!

Bringing The Indoors Out For #Workplace #Design: ...and "how the #office will transform to incorporate more natural elements indoors and how the shift to conducting business outdoors will benefit everyone involved." https://t.co/vqHcbbruxC @facilityexec #officespace @HLWIntl