John Gering, Managing Partner at renowned global architecture, interiors, planning, and strategy firm HLW, has been elevated to the College of Fellows of the American Institute of Architects (FAIA), a select honor awarded to those who have made a significant contribution to the field of architecture. Throughout his career Gering has functioned in a leadership capacity and has been the catalyst for the type of innovation and change sought by technology, multimedia organizations, and academic institutions. His diverse portfolio focuses on uniting Technology and Design with large scale work that includes Media, Academic, Institutional, and Commercial Architecture.

Gering has had an esteemed career as one of the first architects to anticipate the need for distinct, specialized design in the media & communications industry, understanding that a facility’s interiors should accommodate constant change. Gering’s work at HLW focuses on integrating multiple levels of technology and design, fostering a new paradigm in which people and technology interface effortlessly. His buildings seamlessly meet the demands of the modern employee while easily responding to workplace challenges and technological advancements.

“I am honored to be recognized by the American Institute of Architects,” said Gering. “Being elevated to the AIA College of Fellows is a privilege for any architect, and it means a great deal to be recognized by such an esteemed body of my peers.  I look forward to the various ways that I will continue to contribute to the profession of Architecture on a global scale.”

Gering has been able to bring his unique designs to a number of high-profile and impactful structures. Through flagship projects for top companies, he has redefined contemporary standards on a global scale. Some of Gering’s notable large scale campus projects include the restoration and renewal of the United Nations Headquarters Campus Master Plan and Secretariat Building Restoration, ESPN’s Digital Broadcast Complexes on the east and west coasts, and 20th Century Fox Film’s Broadcast Center and Executive Campus. 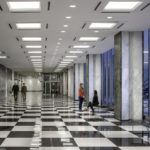 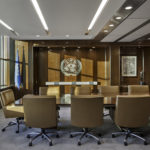 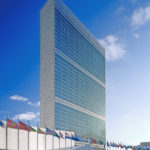 Additional accolades Gering has received include several AIA Awards, the Sustainable Building Industry Council Honor Award, the United Way Impact Award, The United Nations Honorarium for Excellence in Leadership, and the New York Institute of Technology School of Architecture’s Alumni of the Year honor. He has presented at several preeminent speaking engagements including at the AIA National Conference, the National Association of Broadcasters, the Ford Foundation, and numerous universities nationally.

With #COVID19 cases surging across the U.S., it’s important to take safety measures for any public outing. Protect yourself and those around you with these #healthandsafety tips: https://t.co/Hs6sciXhoj

Sustainability Forum: The "C" Word is the 1st in a 3-part series: https://t.co/Y74JJhIqge

One of the biggest decisions college and university leaders currently face is whether to re-open campuses this fall. We asked #students in a nationwide #survey if they're ready: https://t.co/IfRwR5kGEc